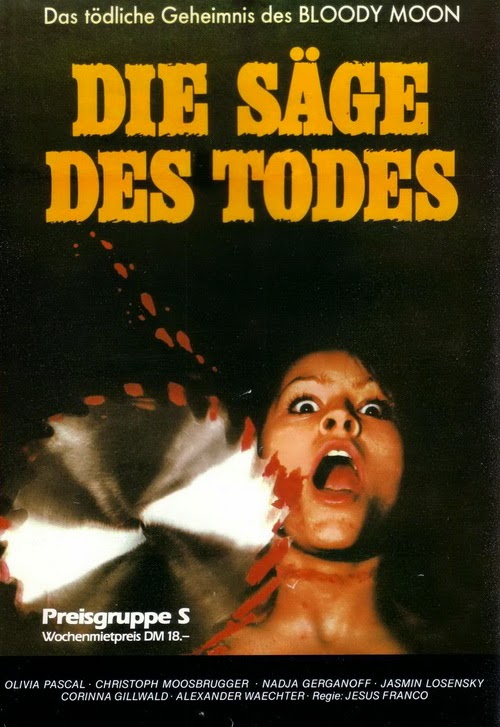 1981 is arguably the premier year of the slasher sub-genre’s golden age. New films fell off the cookie cutter so prolifically that you could have almost set your watch by it but despite the mass quantity of output filling up American theatres almost every weekend, there was not that much of a dip in quality as this year delivered some of the best examples of this kind of horror filmmaking. Take your pick - My Bloody Valentine, ‘The Funhouse’, Friday the 13th Part 2, ‘The Burning’, ‘Happy Birthday to Me’, ‘Hell Night’, Just Before Dawn, Nightmares in a Damaged Brain, Halloween II and The Prowler - are all damn good slashers. 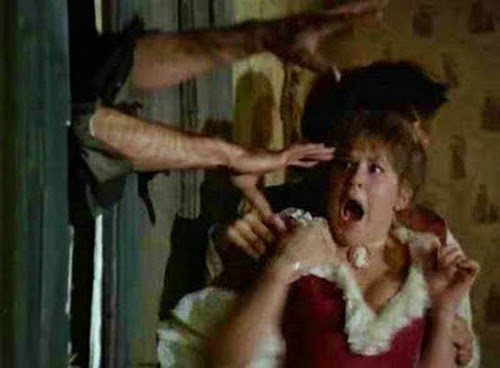 John Carpenter got the ball rolling in 1978 with the greatest of all of the sub-genre ‘Halloween’ that would go on to gradually open in other territories all through 1979. It was though Sean C. Cunningham who picked up the ball and knocked it out of the park in 1980 with Friday the 13th wanting a piece of Carpenter’s success but also wanting to make a more visceral experience by adding the gore factor influenced by Mario Bava’s ‘A Bay of Blood’ (1971). Realized thanks to SFX maestro Tom Savini creating some shockingly gruesome set-pieces it brought the slasher movie into its own and kicked open the door to what would become known as the sub-genre’s golden age of 1980 - 1984. It was not just American filmmakers though who wanted to milk the trend of this geek show entertainment. There was the United States’ neighbours Canada who actually produced some of the very better slashers - In 1980 there was 'Prom Night' and 'Terror Train' both starring Jamie Lee Curtis, the aforementioned 1981 offerings My Bloody Valentine and ‘Happy Birthday to Me’, ‘Visiting Hours’ (1982) and in 1983 ‘American Nightmare’ and ‘Curtains’. However, there were European offerings too... 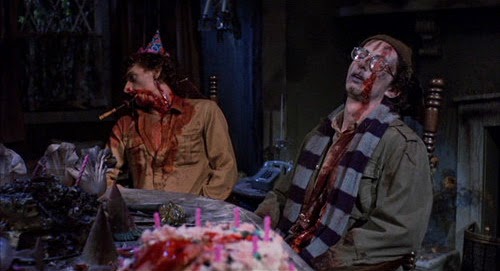 When there is a hugely profitable niche market stateside, you can bet the Italian film industry will be there to exploit it quicker than you could exclaim, “cash-in!” One of the boot shaped country’s biggest hacks the late Joe D’Amato plopped out one of his biggest turds in 1980 with the God-awful boring piece of shit ‘Antropophagus’ with its almost non-existent yet confused plot, non-characters, plodding pacing, a distinct lack of atmosphere and terrible unconvincing special make-up effects. D’Amato followed it up the next year with the slightly better the passably entertaining Halloween rip-off ‘Absurd’ that also served as a kind of remake of ‘Antropophagus’ with its star George Eastman in virtually the same role. While the giallo had long lost its popularity before 1982, the phenomenal rise of the slasher becoming horror’s most successful sub-genre paved a way for a little resurgence. Auteur Dario Argento returned to gialli that year a genre he popularized and that helped to mould the slasher with his last great work ‘Tenebre’ and Lamberto Bava (son of Mario) followed it up the next year with ‘A Blade in the Dark’ which stylistically owes a lot more to the American style.

The meshing of the slasher with its giallo forerunner could be seen around this period elsewhere in Europe in West Germany. The prolific purveyor of exploitation the Spanish filmmaker the late Jesús Franco whose 160 titles body or work is a spectrum of great and better film seen on teeth wanted in on the USA slasher action with an earlier attempt at replicating its conventions while also employing elements of gialli. 1981’s ‘Bloody Moon’ originally titled in German ‘Die Säge des Todes’ (literal English translation: ‘The Saw of Death’) was banned in the UK in 1983 finding its way onto the DPP’s video nasties list although like most of the movies on that list I cannot see why. Maybe it had something to do with its Spanish title ‘Colegialas Violadas’ (English translation: ‘Raped Schoolgirls’. Although nothing of the sort is depicted here - no rape and no schoolgirls. Maybe it had something to do with the infamous circular saw decapitation set-piece that its original German title takes its name from even though it uses one of the most fake looking prosthetic heads ever seen on screen as if it was taken from a waxwork model that makes the whole sequence just incredibly laughable. Maybe it was the far better executed kill scene the nasty knife shoved through the woman’s back and coming out of her breast piecing her nipple that did it. Whatever it was all the film is is a fun piece of Euro-schlock that should not be taken so seriously. 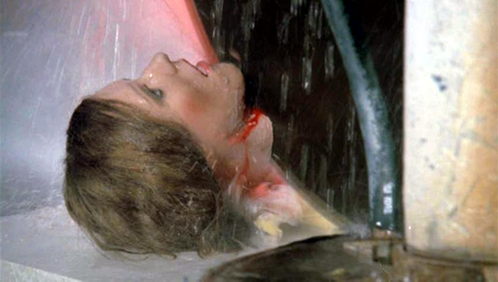 Set in Spain with a largely German cast it tells the story of a horribly disfigured young man Miguel (Alexander Waechter) who tries to trick a teenage partygoer into having sex with him by pretending to be another man she just met at the party wearing the same mask as him. When she unmasks him and is repulsed by what she sees, she tries to fight him off but Miguel enraged brutally stabs her to death with a pair of scissors to her stomach. Sent to a mental asylum for five years he is then released into the care of his sister Manuela (Nadja Gerganoff) who Miguel had an incestuous relationship with and their rich wheelchair bound aunt. Manuela is the head of a boarding school for young women in the study of languages nearby their estate in Costa Del Sol. While on the train ride back, Miguel spots the beautiful Anglea (Olivia Pascal) who is a new student and becomes obsessed with her creepily following her around the school. Miguel attempts to resume his sexual relationship with his sister but Manuela refuses, as it was what caused him to go emotionally unstable and commit murder. She tells him that nobody will ever understand it and the only way for them to be together again is to get rid of everyone. Angela’s friends are then killed off one by one in grisly fashion. When she sees the body of one of her friend’s in her room nobody believes her that there is a killer on the loose as it disappears after she returns from getting help. Is Miguel the killer or is there a bigger picture here? 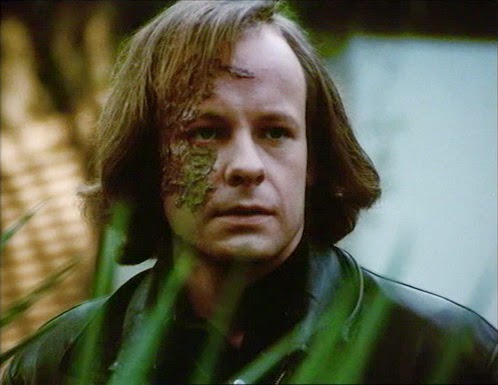 The movie is nothing remarkable for its contents. All Franco does is stick some young horny attractive women in a sunny picturesque location to be carved up in various atrocious ways with some memorably graphic set-pieces be it for the right reasons such as the aforementioned breast slicing or for the wrong reasons such as the also previously mentioned the hilarious circular saw decapitation. To be fair though it is actually a well-directed tense as hell on the edge of your seat sequence but boy does that terribly fake sawed off head fuck up the pay off after such a well constructed build up. The director builds some effective suspense and tension but throws in a couple of obvious red herrings including a mentally challenged handyman as a suspect and adds a bit of gialloesque story with the reveal of its mystery and the killer’s motive that results in a gripping climax. The acting is passable but is ruined by the piss poor English dubbing track and the victims are made up of nothing but annoyingly obnoxious one-dimensional sex obsessed teen girls. There are tits too! We know Anglea is the final girl because she is the sensible one who does not partake in sexual activity and is also very likable and the most interesting characters are the incestuous siblings Miguel and Manuela. What makes the film stand out though is that all this is encased in a wonderful atmosphere thanks to said location and its beautiful cinematography and gorgeously creepy and eerie musical score. 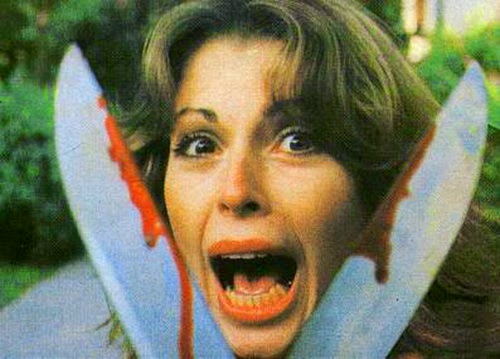 While 'Bloody Moon' is not the best introductory example of Jesús Franco's work deviating from his usual style he still maintains some of his signature sleazy approach. He is evidently more concerned here with recreating a typical marketable slasher ticking all the boxes of its conventions in a time when it was a sure fire money spinner. For the most part, he does it well and it is all entertaining but is nothing significant in the sub-genre just competently done albeit stylishly competently done. It is very atmospheric that makes it worthy of note in this respect. Overall, a recommended euro slasher that sits comfortably alongside its American counterparts of the era.

©2014 Cinematic Shocks, Dave J. Wilson - All work is the property of the credited author and may not be reprinted or reproduced elsewhere without permission.